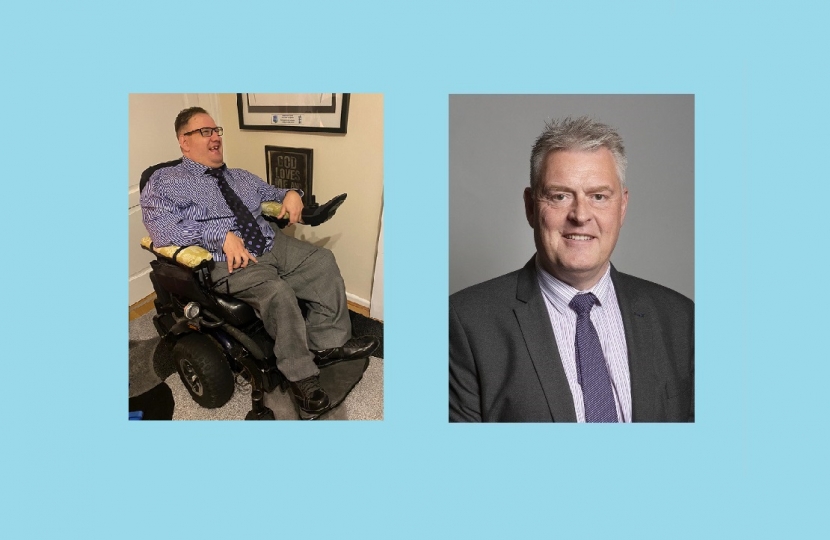 The CDG is delighted to be welcoming Lee Anderson MP - the Conservative MP for Ashfield & Eastwood - to discuss the CDG's #AccessiblePolitics project and the opportunities it presents for the Blue Wall. This is a chance for CDG members to put their questions to Lee Anderson MP, widely regarded as one of the most straight talking & engaging of the 2019 Parliamentary intake.

The event will be Chaired by member of the CDG Executive, Harry Newton.

About Lee Anderson MP - Lee Anderson was born and bred in Ashfield and went to John Davies Primary School in Huthwaite and Ashfield School in Kirkby. His entire traceable family comes from Ashfield. He comes from a family of coalminers and after leaving school he followed my dad into the pits and worked in the pits in Nottinghamshire for 10 years.

After leaving the pits he volunteered at the local Citizens Advice Bureau (Ashfield and Broxtowe) where he stayed for 10 years. He then went on to work in hostels for homeless care leavers, and then to the local MPs office for 5 years. At the same time he became a District Councillor for Huthwaite, after being a lifelong Labour member, he joined the Conservative party in early 2018 and then stood to be a District Councillor for the Conservative party and was successful. In December 2019 he was lucky enough to be elected the Member of Parliament for Ashfield.

He has two grown up sons, Charlie and Harry and lives with his wife Sinead and their Westie Alfie. He enjoys watching Mansfield Town FC play and Nottingham Forest FC. His plan for Ashfield is to create a level playing field for local people, to ensure that everyone has the opportunities they need in life to prosper. In October 2020. Lee was elected to be On the Future Relationship with the European Union Select Committee, the first time Ashfield and Eastwood have had a voice on such a Committee.

About Harry Newton - Harry is a 30 year old gregarious West Yorkshire lad who now lives in a beautiful part of rural South West Wiltshire near Salisbury with his parents. He was born with cerebral palsy from birth and is permanently in a wheelchair. For some 12 and a half years he was a member of the Labour Party, but due to their policies he found himself marginalised.

He has a particular interest in paid employment for people with disabilities, empowering individuals and removing barriers and obstacles. Due to his condition he has found this area sadly lacking and paid employment opportunities difficult to find - this has led him to seek voluntary opportunities. These were with local not for profit organisations called Swan Advocacy Network, TheShaw Trust and Scope. He has a keen interest in social issues regarding disability, the homeless and the marginalised. He is also a regular blogger about his daily life.

His charismatic Christian faith keeps him grounded. Attending a local church on the Salisbury Plain his charismatic faith is fundamentally important to him.

He is keen on all sports and achieved grade 1 cricket umpiring. He is an executive member of Hampshire Cricket at the Ageas Bowl in Southampton.

He completed a long distance politics OU course by going back and doing an access to FE course. While attending a non-maintained boarding school and college outside of Alton in East Hampshire. A relatively new party member - Harry joined the Party in October 2019 - he has wasted no time in getting involved with various groups across the Conservative Party. These include the Conservative Christian Fellowship (CCF) and his local hub of the South West Conservative Policy Forum (CPF) and at his local association level.

Some of his other interests are food, real ale and he is a member of CAMRA, the campaign for real ale. He loves to socialise with friends which unfortunately has been put on hold since March. Thank goodness for Zoom. He has been involved with non league football since 2008 and and has attended over 600 matches both home and away some as far as Southport and Grimsby. He joined Liberate dance group during shielding and goes now on most Saturday afternoons to Winchester.