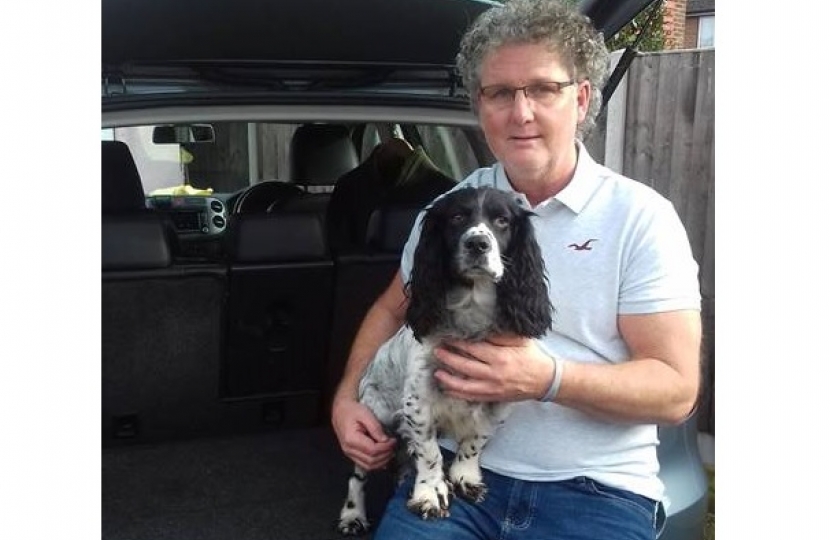 Recently, Parkinson’s UK revealed that almost 90% of people with Parkinson’s have experienced harassment or discrimination. Because of this, over half are avoiding or cancelling social situations due to negative experiences. So often, people think Parkinson’s is just a tremor but it actually comes with more than 40 symptoms that can impact on everything – from being able to tie a shoelace to being able to work.

I had been out walking my therapy dog Teal. As I was reversing out the car park I accidently clipped the bumper of a woman’s car, leaving a tyre mark. It was just one of those things – not related to my Parkinson’s. I got out to apologise and the woman started laying into me – shouting and swearing and accusing me of being drunk. She said she’d been watching me in the park walking the dog, that she could tell from my walk I had been drinking, and that she was going to call the police.

There was a football tournament for kids going on in the park and she was one of the mums.  She called people over and in the end I had around 20 people surrounding me – shouting at me, the language they used was horrendous. I was humiliated and shocked by the barrage of abuse, I was stuck for words and couldn’t say ‘I have Parkinson’s’.

It was a proper gut punch and it made me feel physically sick.  For months after that it knocked my confidence. I was questioning myself all the time – do I look funny, are people staring at me?  And I avoided the park, but I need to get out and about for Teal so I’m back at the park now and make it a point to tell people I meet that I have Parkinson’s. Teal keeps me going.

When I was diagnosed, I had a vision that there would be better care and support in place within five years. Charities like Parkinson’s UK are working hard to make this happen, but policy makers also have a huge role to play.

I am convinced that if policy makers understood more about the often brutal reality of life with Parkinson’s, myself and the other 145,000 people living with the condition in the UK wouldn’t have to fight so hard for support and joined up mental health services would become a reality.

By speaking out I hope to turn negatives like my experience in the park into positives – and help people really understand what Parkinson’s is about.

Gary Berry is a campaigns volunteer for Parkinson’s UK. The charity has launched the ‘Parkinson’s Is’ campaign to highlight the brutal reality of life with the condition. See www.parkinsons.org.uk/parkinsons-is for more information.

Please note 'Guest Bloggers' to the CDG website do not necessarily reflect the views of the organisation - or vice versa - but are invited to do so to encourage debate and act as a constructive forum to promote issues relevant to disabled people and the disability community and their supporters.

'Guest Bloggers' are also not required to be members of the Conservative Party.

A few week ago the CDG's Conservative Policy Forum (CPF) Group held a Zoom discussion open to all of our members to discuss the CPF's Policy Paper on the impact of Coronavirus on our local communities, including disabled people. We also ensured that our submission was sent to our 'Parliamentary C