Living with blindness isn’t the limiting disability some may feel it to be. There are many myths about blindness, being blind does not mean my hearing is “super human” or my sense of touch is more acute than people with sight. I use my hearing in different ways to sighted people, I use it to orientate myself when out travelling; and my sense of touch has only developed by reading braille from the age of 12.

The Royal National Institute of the Blind estimate there to be two million people in the UK who have a visual impairment (blind or partially sighted), many of whom lose their sight in later life. I however, was born with a visual impairment, limiting my sight until going totally blind in 1980. Fortunately for me, an operation in 1981 regained sight in one eye, until it was finally lost in 1994. Having been through the blind system since the age of 12, I felt I could cope with the loss, however this wasn’t the case.

Many people who are diagnosed with a disability often suffer additionally with depression, I did for several years. These feelings come from little understanding of disability, often due to limited exposure to disabled people. The overwhelming reaction to being diagnosed with a disability is that life has ended, or that you won’t be able to do the things you have always enjoyed. Going blind does not mean you have to give up the things you enjoyed before the loss of sight: you can still watch television with the aid of audio description; still attend live sporting events; or continue to work.

My first access work following my loss of sight, was to work with the RNIB to raise the standards of commentary and facilities for visually impaired people to sporting events. Being an avid supporter of Liverpool FC, often travelling to games, I didn’t want to stop, just because I lost my sight. The campaign led to RNIB Soccer Sight, with more than 70 football, cricket and rugby clubs improving their facilities.

Since going blind in 1994, I have been able to achieve much. Having never been interested in education when at school, I have gained an MSc from the University of Reading in 2005; and an Executive MBA from Henle Business School in 2017. I have worked on multi-million-pound projects from the Olympic Park to a national museum. I have jumped out of planes for charity, and I have also dressed up in Star Trek uniform. So, however people wish to live their lives, does not mean they stop just because they are blind or have a disability. Just because blind people live their lives as they do, does not make them “super human”, only normal! 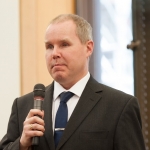 Barry Ginley is the CEO of Tamstone Consulting Ltd, specialists in disability and inclusion.

The Conservative Disability Group CDG, campaigns to break down barriers for disabled people to participate equally in politics and life. As a friend of the Conservative Party, the CDG would like the next Prime Minister to have particular focus on: