Lord Shinkwin - Parliamentary Champion in the House of Lords 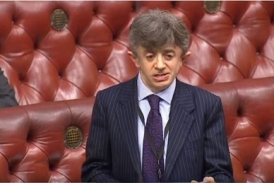